For nearly the last year I've been using my Mac Book Pro with OSX Leopard as my primary operating system, which replaced years and years of Windows XP. I still had to run XP for work development, which I did in a virtual machine. A few months ago I had to move the VM to Vista to help ensure our application compatibility. So now the Windows 7 public beta was available, I decided to try it out as my work VM. Of course I have a handy backup of my old Vista VM - just in case. However after a week of use, I don't think I'll need the backup. Windows 7 should really be called Vista SP2 and it optimises and polishes off the Vista core. In-fact I would say now that Windows 7 finally catches up to OSX, in terms of being a polished, good looking, efficient, practical modern operating system. Having said that, I will not be moving back to the windows platform as my primary operating system any time soon. I really prefer OSX, and here's why...

When I first moved to Macs, I thought "everything looks better, text is easier to read without straining my eyes". So I googled and found that there's a ideological difference with how Microsoft and Apple go about rendering their fonts. To get a clear understanding of the differences see "Font smoothing, anti-aliasing, and sub-pixel rendering". Personally, after over ten years of viewing fonts the Microsoft way, it took less than a month to become used to and much prefer Apple's way. Finally, Microsoft have realised the advantage of a combined application launcher and switcher. The new taskbar acts very much like the Dock now - and personally I think this is a great thing. Icons stay in the same place. Apple dock gives a dot under or next to running applications, while the TaskBar draws a box around running applications. Microsoft have this new 'jumplist' feature - but this has always been present with the Dock by right clicking the app icon to access application specific functionality. However the OSX dock can contain 'stacks', or folders. Just drop a directory on it and you've got an easy menu heirachy, this is not possible with the new windows 7 taskbar.

As for switching tasks, on the OSX side you have exposé, which will display all windows so you can …

Since we develop Windows applications at work, its now starting to become more common for clients to be running Vista. We found our first compatibility issue last week - performing ICMP pings that worked on XP nolonger worked - the API actually failed.

One of the quickest ways to find problems, is for the development enviroment to be moved from XP to Vista. So relunctantly, I am seting up a Vista Business virtual machine for this purpose.

I was quite suprised, however to discover that my Bed's Printer Switcher application works perfectly in it. I was impressed to discover that OSX did this all for me - I don't know if Vista does (it bloody well SHOULD), but if it doesn't at least that will work without fiddling.

Bed's Printer Switcher is a small utility for Windows XP and Vista that enables automatic switching of the Windows Default Printer depending on what network you are connected to. It installs into the system tray and can be configured to exit after switching a printer - I generally have it start it up with windows, 60 seconds later it will change my printer to the appropriate one depending if I'm at home or work and then go away.

Note: This software is no longer being maintained by me, due to moving to Apple's OSX from windows. 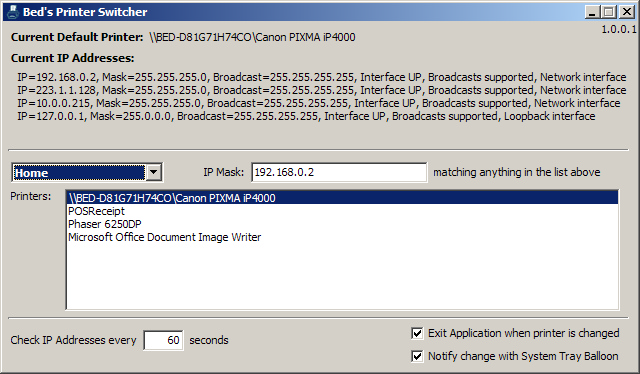 This is a small utility that aids in converting bitmaps, gifs and jpegs into windows icons. It works best with all the icon pages on the net that store the pictures in an OS-neutral format.? Freeware- source available below.

BedPoing was a homage to a great little freeware game I used to play on my Amiga called "Poing!". Its a standard breakout clone with the slight variations of your bat is on the left side of the screen and you need to advance through past the right side of the screen. If you're on level 3 and you miss the ball; you go back to level 2 and get a chance to recover; then back to level 1 if you miss it again. This game is pretty much complete except for the UI graphics. I just could never be bothered finishing it. The level sets can be generated or all pre set and are just flat text files so anyone can create their own levels easily.