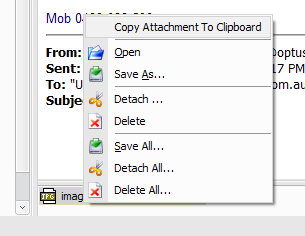 Note: Due to me not using Thunderbird anymore - this extension is nolonger being maintained. If someone would like to take it over, by all means do so.

This extension for windows Thunderbird 2 adds a 'Copy attachment to clipboard' menu option when you right click on one or more attachments. This allows you to then paste the file(s) into an explorer window, or any other application that supports pasting files.
Download - xpi File - 93Kb