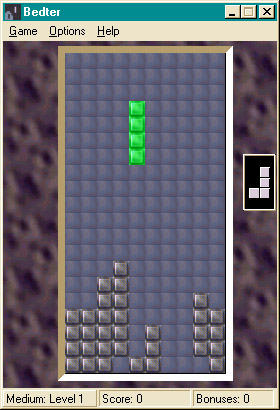 Bedter was renamed from Bedtris after legal threats from The Tetris Company!

The ultimate in tetris style games. With all the features that I wanted in a tetris game because I couldn't find one I liked, so I wrote my own. Now at version 2.52. Bedter is freeware so download and distribute to all of your friends.
Features include:

Here's what people have to say about Bedter:

"The game's pretty cool. It's one of the better Tetris clones out there and it doesn't even take up that much memory either." -- Matt P. , SoftSeek WebPage

"I'd like to commend you on bedtris...it is by far the best tetris clone that I've ever seen, and i've spent quite some time playing it." -- David Ham

"I'm really enjoying Bedtris. I had been using another shareware (BLOCKED) previously to satisfy my Tetris addiction. Yours is much better." -- Mike Morgan

"I just downloaded Bedtris from shareware.com and I love it! Excellent job! I too have been looking for a good copy of Tetris for my home PC and yours is the best!" -- Paul LaBouve

"Downloaded Bedtris from the Net last night. Been playing ever since." -- Barry Kendal

"You have done an incredible job with this game. It is definitely one of the best tetris clones for windows I've ever seen." -- David Ko

"FINALY!!! My wife has had me searching the net far and wide for a tetris game and now it's finaly downloaded for her. Although she has not tried it as yet I have and it's great!! Now all those others can stop taking up room on my disc." -- Rodger Banda

"Bedtris v 2.0 has everything I could possibly want in a tetris game, the music and sounds are awesome, and the graphics are the best I've seen!" -- Rick Chern

"I've been a BedTris supporter since V1.0 came out." -- Daniel Segall

"I'm now the lucky owner of your game "Bedtris". I wish to tell you it's really great stuff, and the soundtrack from the point mode-fantastic!" -- Wolfgang Hinz